Backer BTS Gallery #8 - The Round Room

A little insight into how a location is created.

Almost every show I make needs a gathering spot - a water hole. It's usually a kitchen. I wanted to avoid having to show future food, so we decided instead to make it a pilot's lounge. I had three inspirations...

I wanted it to be a cozy spot. I chose this weird after hours bar in a hotel whose name I can't remember in Montreal. I was there for a conference in 1999. I remember the room was round, the decor was distinctly 70's, and it was a strange oasis of "groovy" in an otherwise corporate hotel. That's what I wanted.

The name "Round Room" came from my time studying law at the University of Toronto and living in residence at Massey College. The college had a meeting room that had one door, and was otherwise just a round meeting space. The idea - everyone is on the same level; there is no "head of the table." I thought the pilots in our show - who are otherwise required to fall in to military rank and division - might buy in to this idea of a single space where all that goes out the window and you can meet each other as equals.

Lastly, I have always wanted to borrow a bit of lore from the old Thorvaldson Building lecture hall where I studied chemistry. The ceiling was covered in paper airplanes. The story was told that during WWII Canadian cadets would write a "goodbye" message on a paper airplane, insert a pin in the front, and throw it at the roof. As long as their plane stuck in the roof and didn't fall down during their assignment over seas, they would make it home alive. Yes, it's probably just a story, but I can tell you from first hand experience that when a plane falls during a lecture, everyone observes it with a hushed tone. I borrowed that imagery for our own round room.

Now that you know the thought process behind a location in Deep Six, here are some exclusive BTS pics of our own round room coming to life. 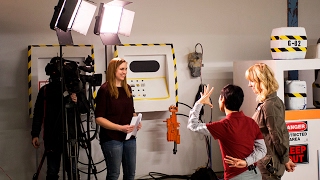 Backer BTS Gallery #8 - The Round Room